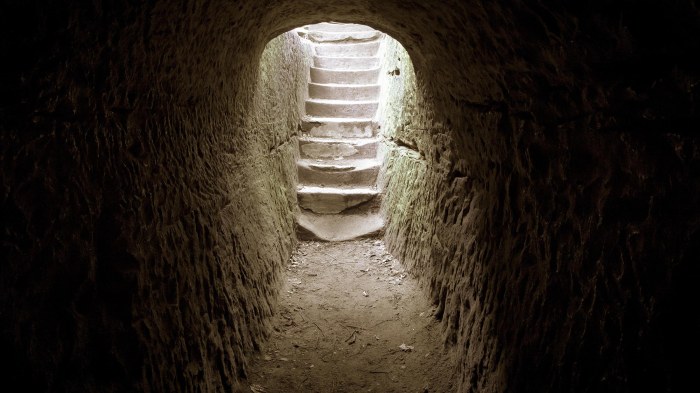 I wonder what Jesus’ disciples were thinking as they stood with him outside Lazarus’s tomb and heard him call the dead man to come out.

As they followed Jesus through John’s gospel, his disciples had seen him do some amazing things. He had turned water into wine (2:1-12), heal the son of a government official (4:43-54) and a man who could not walk (5:1-15), feed 5,000 men plus women and children (6:1-13), walk on water (6:16-21), and give sight to a man who had been born blind (9:1-41). However, raising a man who had been dead for at least four days was different. In the moments that followed Jesus calling Lazarus out of his tomb, I wonder if they believed he could do it, or if some of them were thinking that this time Jesus had gone too far.

One theme that runs through this story, and in fact the whole gospel of John, is believing in Jesus (see 20:30,31). Early in the story, Jesus said to his disciples, ‘I’m glad I wasn’t there, for now you will really believe’ (v15 NLT). It sounds pretty harsh that a person had to die so that Jesus’ disciples could believe in him, but it also tells us something about the nature of Jesus’ work. He wasn’t just a great moral teacher. Jesus is in the business of raising dead people to new life.

We can Jesus’ words in the same way Martha understood them. When Jesus was talking to her about resurrection, she replied, ‘he will rise when everyone else rises, at the last day’ (v24 NLT). However, Jesus seemed to have something else in mind when he answered her,

The Apostle Paul saw resurrection as more than what would happen at the end of time when Jesus will return. Paul understood resurrection as something real for believers in Jesus now. In Ephesians 2:5 he writes, ‘even though we were dead because of our sins, he gave us life when he raised Christ from the dead’ (NLT). Paul shifts our focus from the disciples outside of Lazarus’ tomb to the dead man inside the tomb and points to his story becoming our story through faith in Jesus. Again, in Colossians 3:1, Paul writes,
‘Since you have been raised to new life with Christ, set your sights on the realities of heaven, where Christ sits in the place of honour at God’s right hand’ (NLT).

Paul is saying that, like Lazarus, we have been raised with Christ who calls us out of our tombs to live a new life as his disciples by believing in him.

We can understand this spiritually, in terms of sin and redemption, but this also makes an impact on how we live our lives here and now. When Lazarus lay in his tomb, he was alone, in the dark, and tied up in his grave-clothes. In one way or another, at different times in our lives I think we can probably identify with Lazarus. We may have known loneliness and isolation from others. Maybe we have felt like we have been trapped in the dark, with no light to shine on us or guide our way. It is possible that we have been tied up or bound in our lives by fear, guilt, shame, addiction, or something else that has robbed us of the life that Jesus came to give us (see John 10:10).

The good news of this story for us is that when we identify with Lazarus, Jesus calls us to come out of our tombs and into the light of new life with him. Believing isn’t just standing outside the tomb and trusting that Jesus can do what he says. Believing is hearing Jesus calling us our from our tombs, from our loneliness and isolation, our darkness, and the things that tie us up and bind us. Jesus calls us into a new relationship with our heavenly Father and into the community of believers who become our brothers and sisters in Christ. Jesus calls us into the light of his love and grace, given to us in his death and resurrection for us. Jesus calls us into the freedom that comes through faith in his forgiveness, acceptance, approval and peace. Jesus’ answer to Martha, and Paul’s emphasis that we have already been raised to new life, point us to the reality that the resurrection has already begun in Jesus, and we are a part of it by believing in Jesus.

All this helps us see that, even before we do anything as Jesus’ followers,

Discipleship is … believing that Jesus calls us into a new life with him.

As we stand with Jesus’ disciples in the time between hearing Jesus words to come out of the tomb and the final resurrection of the dead at the end of time, I wonder what we will think. Will we assume that Jesus has gone too far this time, and that he can’t really do what he says? Or will we hear him calling us out of our isolation into community, out of our darkness into the light of his love and grace, and out of what binds into his freedom? And in the life-giving power of the Holy Spirit, will be believe and follow him into the new life he has for us?

More to think about: